July 26, 2009
Today Nautilus was so sluggish that I couldn't stand that any more. I really don't know why this is happening - I've tried searching on Google but no results:(. My CPU usage and disk are getting crazy, when opening directory where is many sub and sub-sub directories especially on USB hard drive. Something is wrong - probably sluggish Nautilus is not due to thumbnails :(.

Xfe
X File Explorer (Xfe) is an MS-Explorer or Commander like file manager for X. It is based on the popular, but discontinued X Win Commander. In my opinion it's not so nice to use it - looks like software written in mid 90 :( 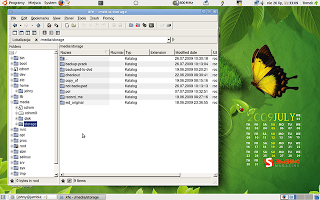 Pros are: small size, responsiveness, lots of plugins and familiarity for new users.
Cons are: no desktop icons support, bugs in resizing of icons (especially navigation bar), icons are too close to each other (no way to change it). 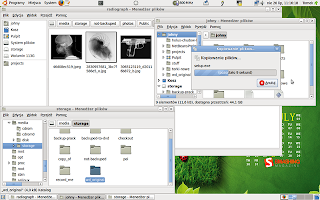 PCManfm
It's really similar to Thunar, but it's better. PCManfm is probably one of the most useful competitors to Nautilus - (pros) it has tabbed interface, it can load large directories quickly, it has bookmarks and several great views it is also stable.
Cons are: there is no way to change thumbnails size (photos), no recycle bin support - deleting is done right now, default file drag-and-drop on the same disk is copy not move. I think PCManfm is the best alternative but not every feature from Nautilus is implemented ... but I will probably use it soon. 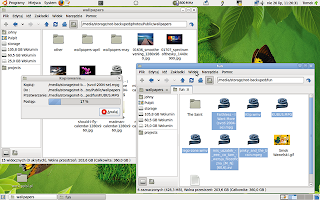 Sometimes I would like to easily move some files easily and quickly. File managers described below can be an "alternative" to Total Commander on Windows.

Emelfm2
A file manager that implements the popular two-pane design based on Gtk2. Some people like it, but I don't - GUI is not very functional other wrong thing is missing progress bar when moving large files and function keys doesn't work :(!. 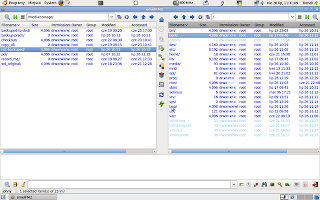 TuxCMD
And we have winner - checkout it - see screenshots. I will use it. 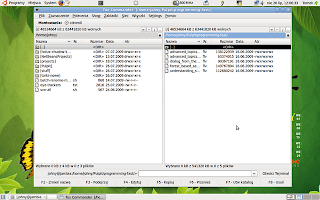 Popular posts from this blog

How to generate user documentation from Perl script?

July 30, 2009
If you want to generate user documentation from POD in Perl should add at the bottom of script this section - after keyword __END__(this is only example - I use this schema for my documentation): i #!/usr/bin/perl print "hello world!\n"; # end of script # TAGS IN PERLDOC: # *PROGNAME* - replace with program name # *SHORT_DESCRIPTION* - one sentence description __END__ =head1 NAME *PROGNAME* - *SHORT_DESRIPTION*. =head1 SYNOPSIS *PROGNAME* =head1 EXAMPLES *PROGNAME* =head1 REQUIRED ARGUMENTS =head1 OPTIONS =over 4 =item B<-v, --verbose> Be verbose =item B<-d, --debug> Be even more verbose - information specifig for debugging =item B<-h, --help> Display short usage help and exit =back =head1 DESCRIPTION *PROGNAME* was designed for *PURPOSE* =head1 DEPENDENCIES =over 4 =item B<perl 5.6> or newer with standard modules =back =head1 BUGS AND LIMITATIONS You are welcome to send bug reports about *PROGNAME* to my ema…
Read More ...

Update:Currently list is longer than 35 projects, during change from Polish to English I have added one new project - and this is why title says 35 instead 34 ;). After updates there are even more! Sorry for your confusion. Google is one of the biggest companies supporting OpenSource movement, they released more than 500 open source projects(most of them are samples showing how to use their API). In this article I will try to write about most interesting and free releases from Google, some of them might be abandoned.

Update:List of projects developed at Google and released as opensource (thanks @dobs from reddit) can be displayed also hereText File processingGoogle CRUSH (Custom Reporting Utilities for SHell)CRUSH is a collection of tools for processing delimited-text data from the command line or in shell scripts. Tutorial how to use it is hereC++ libraries and sourcesGoogle BreakpadAn open-source multi-…
Read More ...

October 13, 2011
When I work on Windows I use Activesite Active Perl to do some stuff. Recently I had to copy about 60 files from large directory structure to a new place (about 800 files in nasty directory structure). It was rather boring stuff to do, so I used perl to finish job because it would be pretty easy task to do using hashes (I had names of files given in text file). Unfortunately I had some problems on completion of job, because there was a problem with encoding of file path name on Windows.Below I provide simple script demonstration how to handle national characters in path using perl on Windows.#!/usr/bin/perl use strict; use warnings; use utf8; use Encoding; # Win32::Codepage::Simple is available in ActiveState Perl use Win32::Codepage::Simple qw(get_codepage get_acp); use File::Find; use File::Copy; use File::Path; use File::Basename; binmode STDOUT, ":utf8"; binmode STDERR, ":utf8"; my $dir = "./copy_from_here/"; my $dest = "./copy_here/…
Read More ...